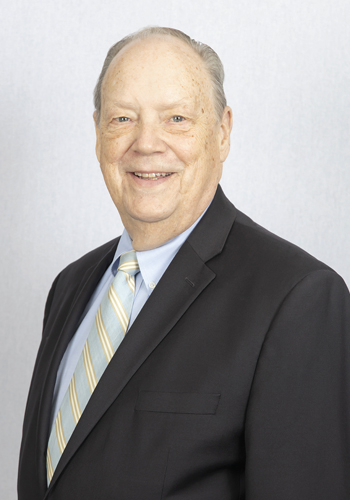 Mr. Pugh is an attorney with over 50 years’ experience in estate planning, probate, and corporate matters. He was recently once again named as one of the “Top Lawyers in Metro Detroit” by DBusiness Magazine as well as a “Michigan Super Lawyer”. He has received the highest attorney rating from Martindale-Hubbell, a national attorney rating service for over 30 years. Mr. Pugh has been a member of the Probate, Estate, and Trust Committee of the Oakland County Bar Association for more than 45 years and served as Chairman in 1983 and 1984. Mr. Pugh is admitted to practice before all of the Courts of the State of Michigan, the Federal District Court for the Eastern District of Michigan and the United States Supreme Court. Mr. Pugh served the 121-year-old Delta Theta Phi Law Fraternity International in virtually all positions prior to being Elected International Chancellor (Top Officer) of the fraternity for 1999 through 2001. Before entering private practice he worked in the Trust Department for a major regional bank.

As a representative of the Oakland County Bar Association, Mr. Pugh has served as a frequent speaker on estate planning and has given seminars on estate planning and probate avoidance to attorneys. Mr. Pugh served as a Chairperson of the Senior Lawyers Section of the State Bar of Michigan in 2010-2011 and served as the initial Chairperson of the 15,000-member Master Lawyers section of the State Bar in 2011-2012. He has been a webinar speaker for the American Bar Association on “Responsible Planning for Closing the Law Office” also on transitioning to a pro-bono and volunteer practice.

In his community Mr. Pugh served as a member of the Board of Directors of New Horizons Rehabilitation Centers where he was chairman of the Personnel committee, The Birmingham Family YMCA and the Long-Range Planning Committee for Lighthouse of Oakland County. He also served as a Board Member and President of the Birmingham Optimist Club. Mr. Pugh served on several municipal committees for Beverly Hills Michigan where he resides. He also was elected to the Village Council of Beverly Hills and served as its highest elected officer, Village President. Currently Mr. Pugh is a Past President of NEXT, the Birmingham Area Senior Coordinating Council and Center where he has served as a Board Member for twelve years. He also provides free legal advice at NEXT through “Ask the Attorney” each month to area seniors.

Mr. Pugh and his wife of 55 years, Sharon, live in Beverly Hills, MI. They are both very proud of their two attorney daughters and their families.